A long time ago, I came across a tiny little restaurant in the backstreet of Paris. This simple restaurant, frequented by the lunchtime office crowd, served the most heavenly chasseur on a small coccote with a stick of baguette. Ever since then, I have been trying to get my chasseur to that standard. Here’s the closest I got to:

Brown the chicken and set aside.

Saute the shallot/onion until soft. Return chicken to the pan. Add the mushrooms and tomato puree. Add the brandy and flambé it. Add the tomatoes and chicken stock. Reduce to a third. Add the cream, and season to taste. Allow to simmer for 5 minutes, ensuring that the sauce is kept thick and consistent, but not burnt or dry.

Serve with fresh baguette, or if you are feeling decadent, make garlic bread to go with it. 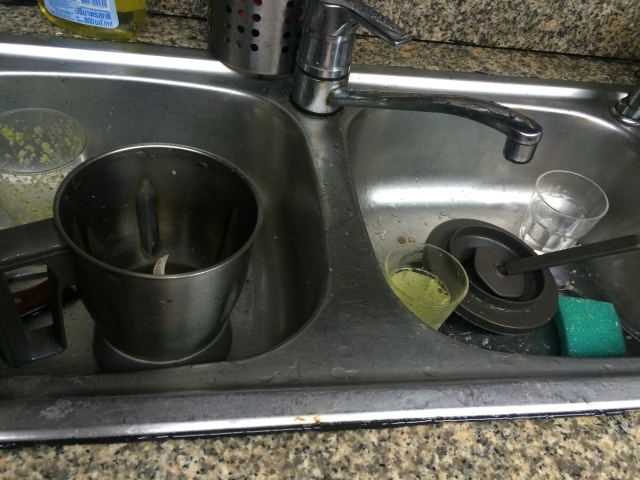 Back home in the UK, I am less rigid about washing up. Because unlike in Asia, there are no cockroaches, ants, rats and other scavengers waiting for your unwashed plates. Also, because of the higher temperature in Asia, any bits of unwashed food also stink to high heaven if left in the sink overnight. Our family also uses the dishwasher less in Asia because there are only three of us at home here. Dishwashing tablets are expensive in Asia.

So, after the long summer holiday…..my child begins leaving dirty things unwashed in the sink. It is often just a glass, the blender, a side plate. It takes me just a few seconds to wash a plate or a cup up. It would be very easy to do when I am washing my own stuff up.

But I yelled at her to come and wash her own stuff up. “I will! In a minute,” she answered back. “I’m doing my homework now.”

Come now and wash up your stuff in the sink, please. No compromise. Reason for my tough stance: it is a habit that I don’t want her to fall into. This is laziness. It is lack of discipline. Because the one minute or so that it takes her to wash these up builds a way of being in her which teaches her not to expect someone to clean up after her.

Apologies for being a Tiger Mum where this is concerned, but so long as there is breath in my body, none of my children will ever have that entitlement mentality because it is an awful way to be. It is never good to use and abuse others rather than automatically elect to do our bit for the world.

In the meantime, I came across this cute photograph on the Internet. My sentiments, exactly!

I should have posted this in the beginning of summer, but truth is, I only made these ice lollies because I was having an adults’ dinner party and I was too lazy to make a dessert. And ice cream can be a hassle to make because you have to keep taking them out of the freezer to beat it up or it becomes hard like rocks.

Ice lollies are simple. You just pour juice in the moulds and freeze.The green one is lime and spinach (and other greens) whilst the creamy one is made from:

A handful of strawberries

Blend the milks and the strawberries – but not to fine. I like to see the red bits.  Add in the agave, desiccated coconut and chia seeds. Leave for the chia seeds to soften (about a couple of hours). Pour into moulds and freeze. 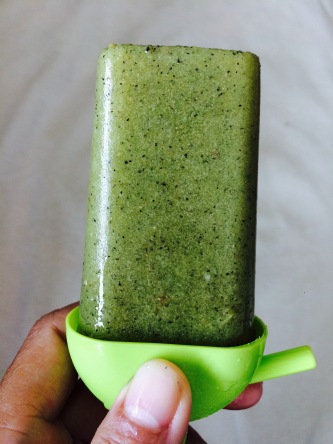 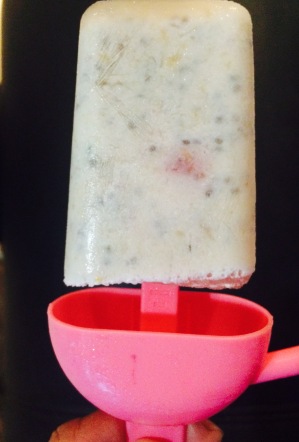 But in addition, I raised my girls to honour their evolutionary biology. Our strength as women is not gained from trying to be ‘better’ than the boys and beat them at their own game. Physiologically, women are weaker. Biologically, women have periods in their lives when they are reliant on others (during pregnancy and nursing). Emotionally, women are peacemakers and homemakers to ensure the survival of our species. Why change something that had served us so well for so many millennia?

Our great strength lies in our ability to cooperate with each other. Women need to trust and work together rather than regard other women as competitors in the fight for men and top jobs.

“I am more of a man’s woman than a woman’s woman,” an Asian woman brought up in Germany once told me proudly. What does that mean? Does that mean you are more European than Asian, this ’emancipation’?

“I have no time for women,” this person told me. “I prefer the company of men. I have more in common with them.”

We gain so much more from working together, especially with other women. Our biology supports that. In the periods when you need to rely on others, that others do not have to be a man. It can be other women who form your protective blanket. When I was gravely ill, apart from my male partner, my strongest supports were three amazing women.

You might denounce this article as amateur psychology, but just look at the success of Grameen Bank founded by Mohammed Yunus that concentrates the bank’s microcredit efforts on women. Women work so beautifully together.

And thus, I raised my daughters to be great friends with each other first and foremost, to learn this basic quality that makes us stronger than tempered steel IF we honour our difference. This is truly our real strength, the inane ability to build and grow together.

Back to my daughters. There are nine years and a son between my two daughters. Their lives together started with Kat, the older one, nurturing and caring for baby sister G. Kat was like a little mother hen and a fierce lioness all at once, protecting her young. She was so proud and defensive of her younger sister.

But over the years, that role slowly evolved. Though still very much the respected one, Kat was relaxing her strictness towards her little sister bit by bit. They began doing things together like shopping for clothes and going to parties, though they are very different as individuals. They began having secrets with each other than no one else was privy to. And slowly, they became equals of sorts, evolving from mentor/protege to confidantes. You couldn’t find two young women who are closer friends, and that is indeed truly lovely to see. 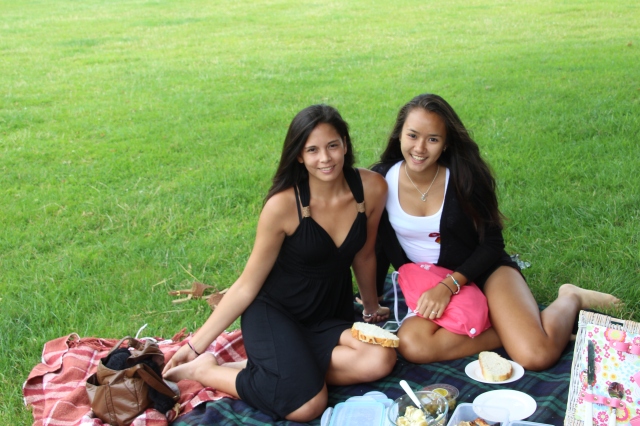 The Internet is so pervasive in our lives, but do you ever stop to wonder about a greater, more magical network, one that is created entirely Nature?

My parents are both passionate biologists, and they created that wonder in me that never dims. Their particular passion is fungi. Mushrooms to you and I. But what we see above ground are just the sex organs of these small but amazing organisms. Beneath these fungus are roots that nurture the whole forest through a beautiful mutualistic symbiotic relationship. A complexity far beyond the comprehension of the mere human brain exists below ground, connecting all living things. Indeed, the forest is far more than you can see.

So here’s a little practice in mindfulness: the next time to log on to the Internet, think about the magical network beneath your feet.

Working on my next book, inspired by my parents, of course ❤

In conversations with my daughter, I became interested in how we learn maths (because my novel is maths/physics-based). She has many friends who does not understand maths, cannot do maths and are scared of maths. Unfortunately that fear and dislike persists till adulthood, possibly for the rest of someone’s lifetime. I hope my Catching Infinity will change that.

There are sociological theories about why maths holds terror for many students: thinking in abstract and in symbols is not ‘normal’ in the world we live in, and also the fact that it is a subject that a student is either right or wrong. Fear of failure often impedes progress in the subject. You have to be relaxed to be good at maths.

Yet maths is the foundations of so many things. Like physics.

Here’s something that came to my attention recently:

One thing that never fails to awe me is the fact that so much of the human brain is unknown despite the billions we have invested into its research. For example, do you know that there is a special part of the human brain that is responsible for comprehension of physics/physics-like subjects? Take away the maths and the scary equations, physics is just an inner intuitive sense for how things will bounce, wobble, or fall. We use it all the time unconsciously in our heads. So, my message to adults and children alike, learn to love physics.

To test the physics centre of your brain, go to:

I get absolutely no sympathy from my mother whenever I complained about her grandchildren. She would remind me with a smug grin that I was even worse. “You were a hundred times worse, Jac,” she would say cheerily.

Which leads me to think, teenage rebellion is a rite of passage. Children become teenagers before they become adults, and thus, the teenage years are a staging post where they push the boundaries and explore who they really are (rather than extensions of their parents). When teenagers rebel against your house rules, they are testing how far they can go and what they can get away with. Clamp them down too much and they fail to develop their own personalities. Give them too much liberty and they become unlikeable, obnoxious adults.

My feisty and headstrong sixteen year old G who has strong views on everything is surprisingly easy to deal with. For someone who claims to run her own life, she is surprisingly compliant with our house rules. For example, a few months ago, her whole year group was going out to the notorious party town of Patong to celebrate the end of the year-end exams. Our curfew was midnight. “But the party hardly starts then,” she protested half-heartedly. True. They were meeting up at 11pm. Her friend’s mother offered to accompany the girls and took out a hotel room in the middle of town. G asked if she could stay over. No. Of course. “Why?” She demanded. “I just want to know.”

And really, that was the end of our unpleasantness. I think a lot of it is down to establishing good communication between you and your teen. Recently, a mother issued her daughter ‘rap sheet’ which the daughter posted online and it went viral:

You can read the story here.

These are my six tried and tested strategies of coping with teenage rebellion: