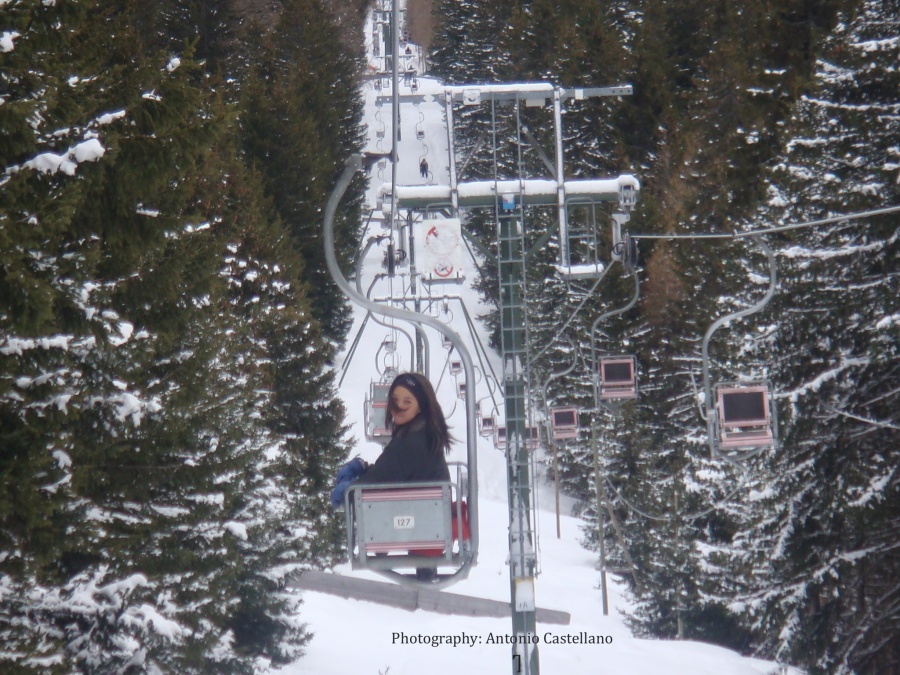 “It’s ispirazione, not inspirazione, or do you mean inalare?” The man called Antonio Castellano said. I think he was smiling at the thought of my poor mastery of his mother tongue, though scarily enough, most of my outpourings in Italian are about him.

Whatever it is, he is my inspiration (ah, the English language is so much simpler!). And inspiration comes in many forms, at surprising stages of your life. I was a doctor, lacking passion for my job, when I met Antonio on an enchanted tropical island in the Javanese sea, sleeping in little eco-huts under mosquito nets. He had come to the island on his own, to ponder about life’s big questions but ended up inspiring me instead. He inspired me to go back to school to train as a surgeon, to discover my passion again.

He did it with his beautiful writings over the following months. He would type in his Blackberry, or scrawl on a piece of paper, and later, he would read his writings back to me. His writings are self-deprecatory, soul-searching and always honest, and they touched me ever so deeply. I loved the cadence and the silences in his words. Later, in Milan over a couple of winter evenings, he read to me the manuscript that his friend Ambrogio wrote about a war-time love story in Monte Rosa (or maybe Arosa). And in a sense, this is why I write a lot these days, even on my busy days – to continue the magic that I once discovered in faraway Jakarta. His writings certainly changed my life.

There is something about Antonio that struck a chord deep in me, not least because he is Italian, and I am 25% Italiana. That Italiana side of me never achieved full expression until Antonio. But more than that, it is the silence we both share that created something special between us – as young children, we both began speaking later compared to ‘normal’ children. As adults, we still do not speak much, but we began building a bridge into each other. He had always been more adept than I with words, so I began writing ‘Ten Most Beautiful Equations in the World’ for him. Those ten equations now form the basis of the novel I am writing.

Years later, I often asked myself, “Why am I continued to be inspired by Antonio, why could I not get his words out of my mind?” I miss him. I miss his light. And therein lies the answer. His light.

Before I knew him deeply, I wondered where his light came from. I found the answer when I visited him in Milan. On the first evening I arrived, I met all his childhood friends except one (we went to Verona a few days later to meet him). I was jetlagged and ever so slightly intimidated to be faced by a wall of Italian men who had known each other all their lives. But they were grinning at Antonio and I as soon as we walked into the restaurant.

I told them I suggested to Antonio that he coaches football at my children’s school on weekends. I told them that he began going for Ashtanga Yoga in Jakarta. I told them he cooked traditional Sicilian food for me from his uncle’s recipes. They roared with laughter. “What are you doing to our Tony?” One of them said, eyes sparkling, merriness pulling at his lips.

And then I saw it all at once. Antonio gets his light from his friends, from this band of brothers sitting in a closed circle which embraced me, warm and generous, and suddenly, I could picture the boys that they had once been, all innocent and a bit cheeky maybe, but full of openness, generosity and light nonetheless.

Light begets light, and my post today is about wishing you the opportunity to absorb light, so that you radiate it, touching other lives. 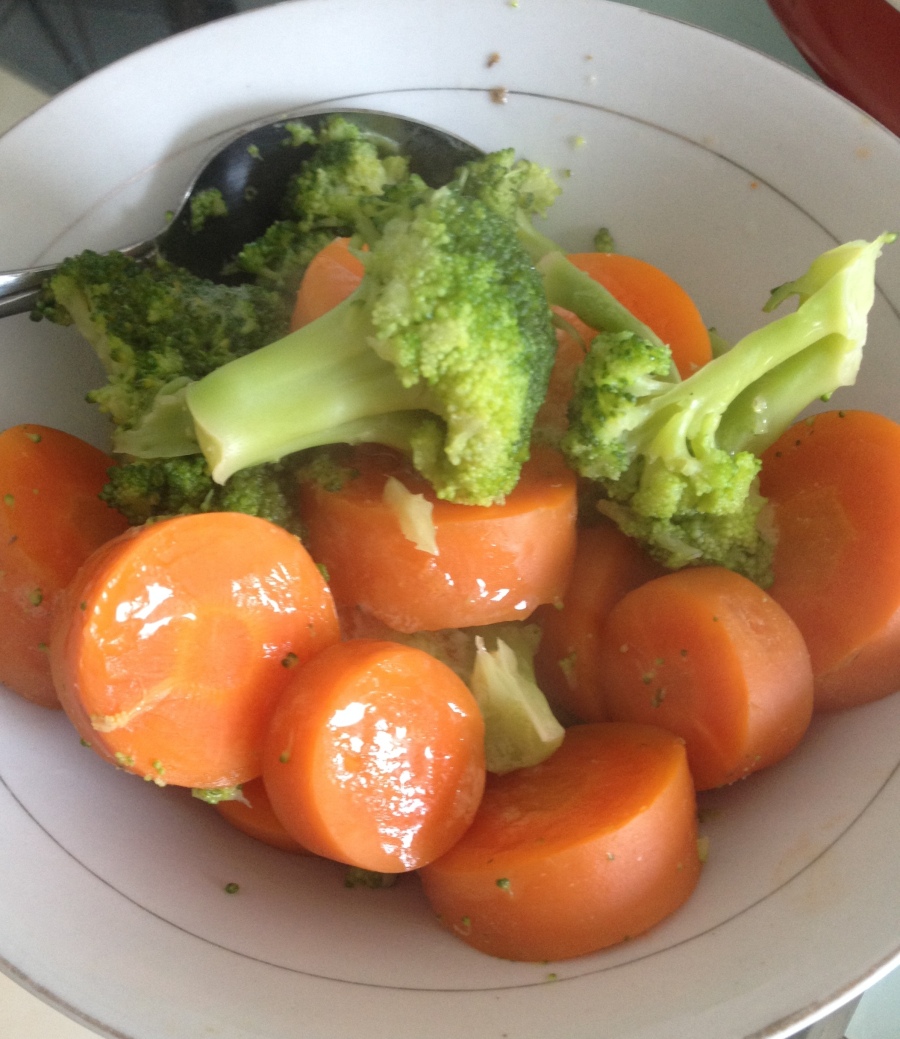 Dining table battles have been fought over the generations between exasperated parents and mutinous children about eating veggies.  What is it about veggies that some children absolutely loathe? Parents often resort to innovative methods such as ‘hiding’ veggies in meat or disguising the taste with lots of sauces or adding them to smoothies. Hmmm.

Here’s the thing: there is nothing like the goodness of lightly steamed vegetables.

Steaming vegetables preserves its nutrients, especially the water-soluble ones. Just steam lightly, to preserve the enzymes, too. Indulge yourself by adding a large dollop of butter to your steamed veggies.

Yes it is plain, yes it is bland, yes it is boring,  when pitted against kiddies’ favourites such as bolognaise or the ubiquitous shop-bought tomato ketchup. But I think it is good to teach children to enjoy the simple things, to be conscious of the subtle, and it starts with the tastebuds. Food does affect consciousness and behaviour. All part of awakened living ❤

Food is cultural and has very deep roots.  I am into Soul Food because my mother brought me up on Soul Food (otherwise known as boring British food) and even now, at 47, whenever I feel battered and bruised by the world, I would curl up with some comfort food and hark back to those safe childhood days.

In my teens and twenties, my cooking evolved to embrace French (I went to a finishing school) and Italian (I am quarter italian) influences.  My twenties and thirties were largely dominated by nursery food as I struggled to feed my growing family on a shoestring and time-deficits. Lately, I have been exploring German food. This was taught to me by my German neighbour in Jakarta, and here it is, with some adaptation.

Boil organic chicken in water until par cooked (about 30 minutes). Remove from heat and shred the meat.  Reserve the stock. Saute some onions, button mushrooms and carrot chunks.  Add in the shredded meat. Pour cream into the mixture, add the reserved chicken stock until the liquid resembles a soup. Add a small jar of capers and its water.  Simmer until the liquid is reduced to think creamy consistency. Season to taste.

Served with potatoes and steamed vegetables, with a good dollop of butter. The ultimate comfort food ❤

Continuing from my previous week’s post on so-called Soul Food, here’s my adaptation of the french classic, Chicken Chasseur.  As a working mother when my kids were young, I have always been a fan of one-pot meals, especially those that I can put on in a slow-cooker before I leave for work, and et voila, all ready when we come home, tired and hungry.  As you can see from the photograph, my recipe here uses store-cupboard staples, such as passata, borlotti beans and sweet corn – and of course, frozen  homemade chicken stock that I always keep in the freezer.  If you can, use fresh ingredients, but this ’emergency’ food tastes yummy too.  It’s in the sauce and slow-cooking, I think, and of course, the love ❤

Brown chicken thighs in olive oil until golden on both sides.  Remove from pan, drain excess fat but leave about 2 tablespoons in the pan. Saute one large onion until transparent. Add 2 cloves of roughly chipped garlic and sauté until slightly softened.  Add button mushrooms and sauté.  Add whatever vegetables you are using.  Add passata or tomato puree, wine and chicken stock.  Bring to boil.  Add browned chicken thighs and black peppercorns. Simmer on the lowest heat for as long as you can (minimum 2 hours).  Keep adding stock to adjust the consistency.  Season to taste. 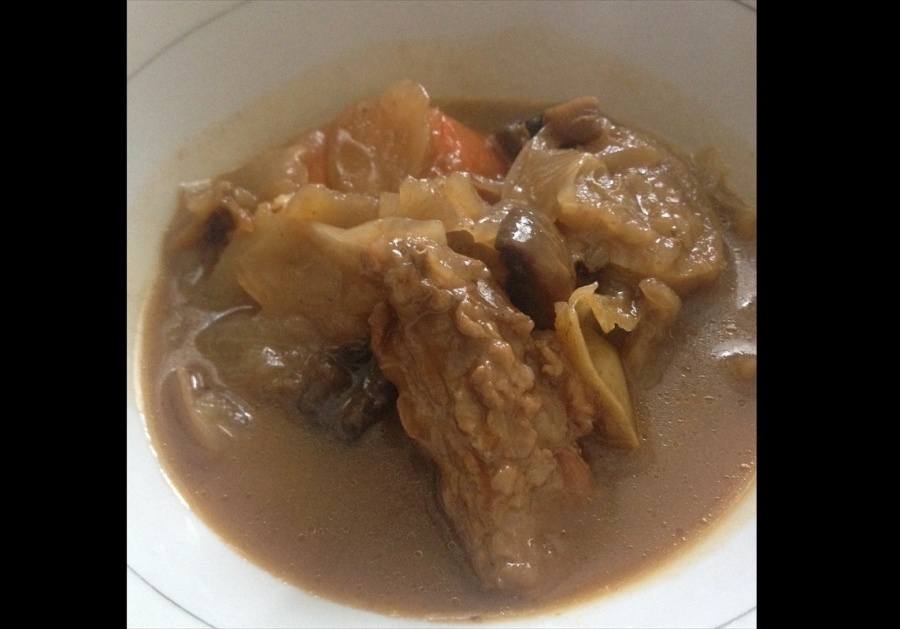 In the distant, halcyon days when the kids were young, and life was simple and good, we would painstakingly collect coupons from newspapers to enable us to travel to Paris on a shoestring. There, in the Capital of Love, we would subsist on fresh baguettes, cheeses and hams, washed down by cheap wine (for us parents), as we sat by the Seine or up in Montmatre, eating our cheap simple food.

The kids would press their noses against the window of Fauchon, and ooh-ed and aah-ed over the sumptuous and lavish food, but really, we were happy with what we had.

Our only luxury was popping into this local, traditional café that served only one type of casserole a day, be in coq au vin, poulet chasseur or boeuf bourguignon. The casseroles came in cute little individual dishes with unlimited supply of freshly-baked baguette. The stews were always hearty, rich and warmed the soul.

Here’s my version of the classic bourguignon:

Sauté chunks of braising steak (best ones are those with fat on it), chopped onions and whole garlic cloves in LOTS of butter until browned. Add in button mushrooms, carrot chunks and a large apple (or four small ones). Add more butter, homemade stock, one tablespoon of tomato puree and half a bottle of red wine. Throw in a bay leaf, bring to boil and transfer into a slow cooker or a rice cooker. Season to taste. Cook until the meat melts in your mouth (it could take hours, but that’s it about slow-food, not fast food).

Many years later, we returned to Paris. We could afford lunch at Fauchon by then, but we went looking instead for that sweet cafe. Sadly, it wasn’t there by then, but here’s my homage to Paris in the Nineties.

Here’s a long article in the New York Times.

What struck me is the truth in it. So many times, we agonised about making the big decisions in life (“the BIG one”), when really, at the end of the day, it doesn’t matter. It is the small, little ones that we make unconsciously, organically, every day that matter in the end.

Many women caught in the career-or-motherhood decision trap. BIG decision. But really, it is the small ones in your everyday life that lead you to the right decision for you. When I consciously tried to get pregnant with my third child, people around me told me to think carefully, because it would be difficult enough to manage a career with two young children. I am glad I did not listen to those well-meaning friends, because nobody should give advice on your life until they have walked in your shoes for at least a year. Fortunately, I was strong enough to realise that, and I made my decision on the day-to-day basis: what feels good and right today, and what works for our family? I never thought about it in terms of Motherhood Vs Career, but the daily happiness of our family life. Because the future is not known. And big decisions are based on theories and projections, whereas the small ones are real life.

Terence J. Tollaksen wrote that his purpose became clearer once he began to recognize the “decision trap”: “This trap is an amazingly consistent phenomena whereby ‘big’ decisions turn out to have much less impact on a life as a whole than the myriad of small seemingly insignificant ones.”