Religion is actually a very beautiful philosophy. It is sad that these days, the world is so polarised, over-sensitised, fearful, filled with irrational hatred and cowed by political correctness when it comes to religion. I had to think twice before writing this, so conditioned am I into thinking that the r-word is a tinderbox that could incite a large, destructive flame.

My view is that it is a personal journey, a private choice and a joyful way to be. Religion has killed loads, but it should not be buried any more than cars, sleeping pills and guns should be eradicated. It is the darkness of men’s hearts that brings about the destruction over the centuries, not something as simple and private as religion.

It all goes wrong when we try to enforce our own interpretation of what we think religion is. I often have pious churchgoers correcting me, believing with close hearts that their views are right, and mine wrong. Wasn’t that what killed the millions? A book read with 10 different eyes will yield 10 different perspectives; a sermon heard by 10 different ears will hear 10 different messages. We each have to find our own truths.

My mother-in-law knew me when I was a spoilt teenager. She expected much of me, she was tough on me and she did not tolerate my nonsense which my indulgent parents thought was cute. It was non-negotiable where my mother-in-law was concerned that I had to learn how to cook and clean, and care for her son and her grandchildren. I did not think it was that important to clean behind the refrigerator a week after my son was born, but my mother-in-law chided me for my lack of hygiene which she believed stem from my fundamental laziness.

“How would your baby survive?” she said with a shake of her head.

Fine. Point taken. Cleanliness is next to godliness. But learning how to sew? Apparently, that was in the must-have toolkit in my mother-in-law’s view.

However, she never expected me to follow her religion. She naturally assumed I was a heathen, since I had a laissez faire attitude towards going to church at that time, and I was someone who consented to a one-night stand with her son whilst I was already promised to another.

She just went about her way, taking the grandchildren to church.

And that was how my children were brought up. Catechism classes and Catholic schools. Baptisms, Holy Communions, Confirmations. The four older ones grew up beautifully, blessed with an inner grace even when they were at their worse.

But my youngest, Georgina, she fights it.

We persevered. She fought our implacability with anger, and we did something we would never ever thought we would do: we made deals with her. If you go to Sunday school and the church service later, we’ll go swimming. We’ll buy you this. We’ll allow you to have a fizzy drink (she was not allowed them). It was bad parenting, because after all, isn’t parenting about enforcing laws and forcing children to follow the ‘right’ path?

But if we had done that, we would have ended on the same track as the zealots who believe “I am right and you are wrong”, or “my God is greater than yours”. When it comes to religion, our sole aim is to give the children the foundation to make their own choices. we flood G and her older siblings with prayers, love and the light of the church. In time, they will follow the path, because parents’ faith is like a candle in their children’s lives. It doesn’t require force, but grace in how we lead our lives as parents.

G is still a long way off from being a devout Catholic. But then, I wasn’t, until I loved my mother-in-law and saw the beauty and grace in her ways.

This child of mine “loses” her rosaries. Intentionally, I think. But we never scolded her. Instead, we buy her beautiful ones every time we visit a holy place.

“I already have ten,” she would say stormily.

“Ah well, keep this one in your school bag then,” we would answer. ‘Or your pencil case. Or football kit. Who knows when you will need it, eh?”

We go to church. I hold her father’s hand during the prayer. I feel the electricity of his fingers. Almost thirty years of history in his touch. I know G feels it too, though she glares defiantly at the priest.

“Why are you praying so hard?” she demands. “What are you asking God to give you?”

“Nothing,” I answer her. ‘I make it a point to ask God for nothing.”

“You are praying for my brother’s safe return from the Middle East,” she says. ‘You are asking God to spare his life.”

“No, Kit is a good Catholic. He can pray for himself. He does not need his mother to pray for him.”

“And then?” she insists.

I give her the answer. “I pray for your grandmother, G. She who taught me to love God. She who prayed for us all. I pray for her, because she is unable to pray for herself now.” (My mother-in-law has advanced Alzheimer’s and no longer functions).

Her eyes grow wet. Love will bring her to the light. With softness.

And for me, this is religion, the realisation that there is something beyond the narrow confines of the self, beyond the here and now, and a pure love that goes on and on, through the family, by the grace of God. 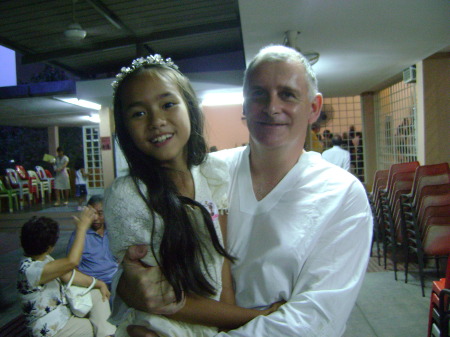 2 thoughts on “Finding Their Own Way”