I have five children. Georgina (”G”) is the youngest. She is 14. And she is the one causing grey hairs to sprout abundantly from my scalp, if old wives’ tale about correlation between lack of follicular colour and stress is to be believed. 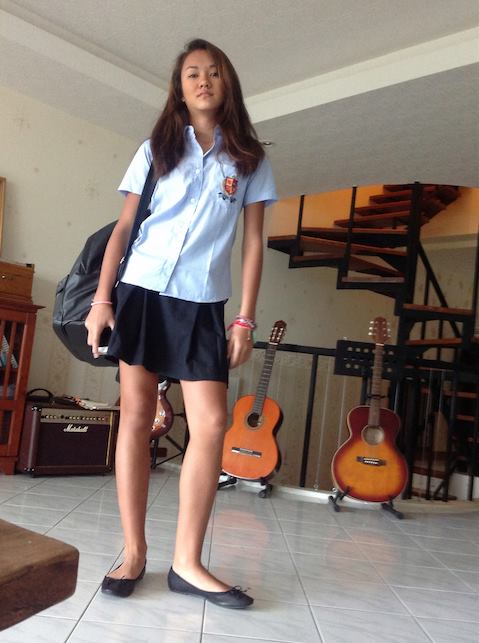 Today was her first day at a new school after the long summer break. I got up early to have breakfast with her and to kiss her goodbye at the door as per the perfect family scenario.

But instead, we stood across the room from one another, the chasm as wide as our generation gap, snarling like a pair wild beasts. I was quoting the school rulebook aggressively at her, whilst she obstinately stood her ground.

For starters, her skirt was far too short. School rule says, the hem must be skimming the knees. Hers was sitting defiantly somewhere mid-thigh, showing off her long coltish legs. Yes, she had done what bold schoolgirls from previous generations had – she had rolled up a good 10 inches of the length at the waistband.

“So?” she said with a jut of her chin. ‘You can’t see my knickers, can you? And anyway, I am wearing shorts underneath.”

“You have to make your skirt longer,” I said in a voice that invited no further discussions. “Because it is part of the uniform rule.”

“And why is that so? What is the rationale behind the on-the-knee rule? You can’t see my panties at this length. It is not even a safety issue in the labs to wear shorter skirts. And anyway, some teachers wear skirts that are much shorter than this.”

And then there was the make-up. Lashings of mascara and eyeliner. And lipgloss (“Mum, it’s for moisturising my lips, you don’t want me to have chapped lips, do you” With saccharine sweetness).

And the multiple ear piercings (“OK, I will take my ear studs off when I am playing sports.” Grudgingly.).

And the colourful bracelets (“They are for religious reasons,” said this heathen child. “I got them from the monks in Cambodia, and it’s bad luck for seven years to remove them.”)

Her father, watching from a safe distance, said, “Let her teacher deal with it. After all, it’s the school that sets the rules, so let a member of staff justify those rules to her.”

Then, damningly, he added, “I actually agree with her.”

I stared at him in disbelief. “You can’t subcontract disciplining your child to teachers. It is our responsibility as her parents to raise her right.” That’s the Asian Tiger Mum in me speaking. The part of me that expects unquestioning, blind obedience, on the basis that I am the parent, therefore I must always be obeyed.

But fortuitously, recent stimulating conversations with my neighbour Richard Boyle short-circuited the part of my brain that is conditioned and sleep-walking, to jolt the slumberous thinking part that my parents had invested a lot of money (three years at Oxford) to cultivate. Richard and I had been discussing the masses’ readiness to obey governments unquestioningly, blindly (is it laziness, fear, or lack of self-empowerment?) We concurred that one does not have to be a rebel or an anarchist to question instead of obeying blindly. It is about exercising one’s brain, it is about doing audits, it is about functioning as check-and-balance, it is about being alive, instead of going along like sheep and lemmings with the decisions of the minority who rule.

For example, did you question, protest or think about fluoride in drinking water? Or did you accept the PR line that “It’s good for teeth”? What do you think?

And so, having taken some time to mull over it, I think that raising a child right entails teaching him or her when and how to question authority – politely and constructively, of course – because it is part of the learning to become a thinking adult and a responsible member of society.

This child of mine is fortunate that she has had far-sighted teachers in the past who had supported her mental growth. Most notably, Mr. Jonathan Booton.

At 10, G had marched up to him and asked, “So, Mr B., why are there new dustbins in all the classrooms on our floor?”

Jonathan Booton, without missing a beat: “To justify the exorbitant school fees that your parents are paying.”

Yes, I blame him. With great affection.